Accumulating points to save money on Switch eShop purchases is all well and good, but Nintendo’s current rewards system for loyal customers arguably lacks the pizzazz of the old Club Nintendo days.

That’s not to say that the more recent My Nintendo physical goodies are bad. In fact, the swag you can redeem Platinum coins for nowadays is much the same as the lower tier offerings you would find while browsing through the Star Catalogue of old. And who doesn’t love a good Splatoon 2 poster or a 2021 card calendar?

Before morphing into its current My Nintendo guide, Club Nintendo began life in Europe as VIP 24:7 in 2002 before switching to the same Club Nintendo branding as Japan during the Wii era. Meanwhile, North American Nintendo fans wouldn’t see the loyalty service arrive until 2008. It certainly had its fair share of tat and rubbish to waste your points on — how we pity the poor souls who frittered away their star points on digital wallpapers! — but it also had some pretty special exclusive items, too, including sweet statuettes and even games (hello Game & Watch Collection and Tingle’s Balloon Fight).

We decided to ask around our staff and contributors to find out their very favourite Club Nintendo treasures from yesteryear. At the top of the page, for example, you can see NLife Editorial Overlord Damien McFerran’s glorious Game & Watch Ball, a decade-old reissue of Nintendo’s very first Game & Watch from 1980.

That’s a tough act to follow, for sure. Read on to find out our other staff picks…

Back when I had zero money, I was such a sucker for loyalty card schemes. I got all my games through buying and trading them in as quickly as I could, and in the process, I amassed a veritable HOARD of Club Nintendo points. And god, the rewards were good. I practically broke the “order” button when the transparent, shiny playing cards came out, and I even brought them with me to Canada, despite being too precious to ever use them.

They’re like a badge of honour; I have no idea how rare they are, but they make me feel like a collector. When I’m 80, I will show them to my grandchildren, and say, “a long time ago, there was a man named Mario… they killed him in 2021, of course, but before that, he was an icon”. I have a decent amount of the goodies Club Nintendo offered us in exchange for our thoughts over the years, but none have been more useful to me than these DS/3DS cartridge cases! I have a borderline unhealthy collection of DS games, most of which have their original boxes and manuals, but the few I do own without their boxes stay in these cases until I can pair them up with their original plastic homes.

Each of these hold 18 games total and they’re the exact size of a standard DS case, so they fit on the shelf like a glove! Whenever I go out game hunting or when I would travel to retro game shows I would always keep these in my backpack, in case I picked a new loose cart for the collection, or someone had some boxes to trade me! Both of these cases came with different artwork inserts too, but honestly, I’ll never change out the legendary Zelda art I have in them now!

Next up, Alan reveals that he, too, treasures his Zelda DS cart case; his is just objectively better than the last. Sorry Zion!… 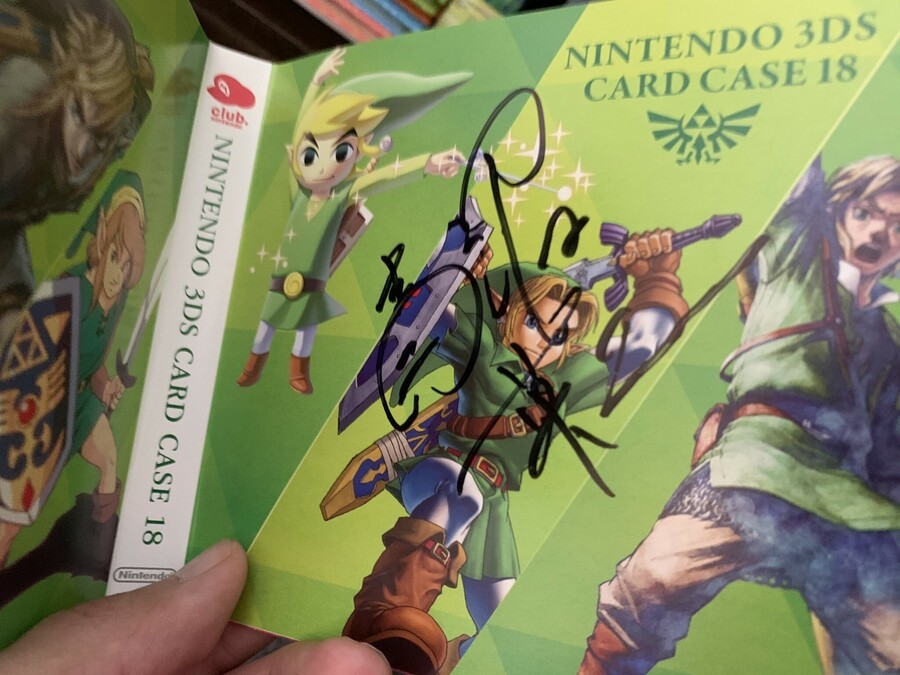 At my first E3 way back in 2014, I was aimlessly wandering the halls of the LA convention center when from the corner of my eye I saw a strangely familiar figure walk past me. As if by stimulus/response, my brain told my mouth to shout out: “Mr. Aonuma?” The man stopped, turned, and stared at me. In that moment, I had never been aware of anything harder than I was then: aware of my inability to speak Japanese.

Fortuitously, I remembered I had a Zelda item in my laptop bag: a Club Nintendo 3DS case. Before he could turn away, I reached into my bag and pulled out the case, and handed it to him, along with a marker I had coincidentally just been using. He took the case, nodded at me, and signed it. Almost immediately, random show-goers walking past us had begun to take notice of the scene, and they, too, began producing Zelda items from their bodies for him to sign.

My signed 3DS case remains my little secret, tucked away in my collection. As, too, is the little known fact that a statistically relevant number of people must apparently keep Zelda memorabilia on their bodies at all times, just in case. I never had a huge amount of Club Nintendo swag, perhaps because I never seemed to have quite enough points to get the really good stuff. Still, I always liked the look of the quality trinkets and branded doohickeys on offer, and nowadays I get incredibly jealous when I spy other NL staff members’ bygone treasures on my Twitter feed.

Apart from my Japanese copy of Tingle’s Balloon Fight (which I bought on the internet rather than earned by scratching foil off Star Points cards), my one prized Club Nintendo possession is a coin commemorating the Year of Luigi which came in a nice soft case with the logo stamped on the side. It’s a weighty little thing — quite useless, of course — but of all the video game-related tat I’ve got pugged around my home, this is one knick-knack I’ll always take a moment to examine and turn over in my hands whenever I happen across it. It never fails to put a big grin on my face. 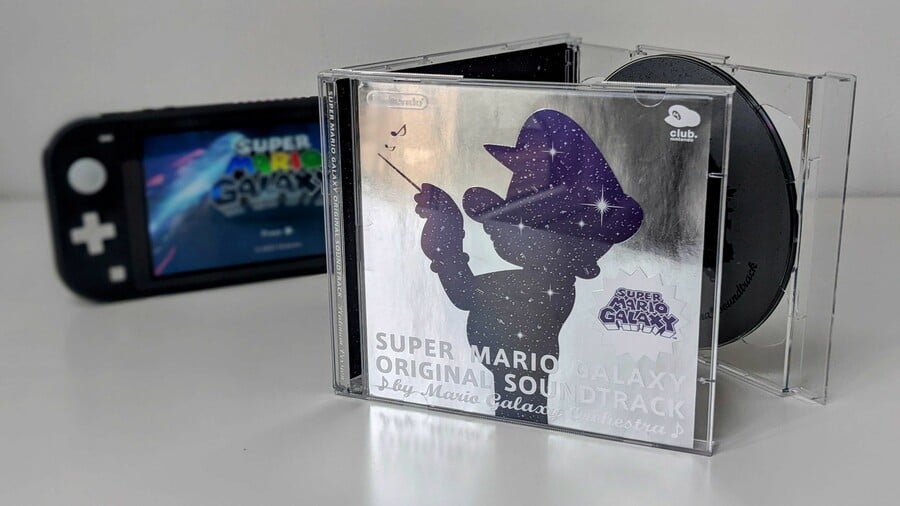 I’ve always loved a good video game soundtrack, and back when CDs were still a thing (‘see dees’, you say..? Curious…), they were always the first thing my eyes were drawn to when browsing the Club Nintendo offerings. The Super Mario Galaxy Original Soundtrack is a 2-disc buffet of all the wonderful orchestrated tracks from the game; I used to listen to such hits like ‘Space Junk Road’, ‘Gusty Garden Galaxy’, and ‘Buoy Base Galaxy’ while working on Uni assignments, and let me tell you, that soundtrack got me through some stressful times! I’m lucky enough to have a few Club Nintendo goodies that I collected over the years, so choosing just one is a pretty difficult task. Apparently ‘all of them’ isn’t in keeping with the spirit of this article though, so I’ll opt for this cute Nintendo Sound Selection – Endings and Credits soundtrack.

As the name suggests, the two CDs included have a number of songs from various Nintendo releases over the years that play during each game’s credits. It has classics like Super Mario 64 and Super Metroid, and even some that were new at the time like Tomodachi Life and StreetPass Quest II of all things. There’s a sweet little book inside that tells you about each featured game, and it serves as a great soundtrack to just have on in the background. Lovely stuff.

Nostalgic for the time when you were part of the ‘Club’? Prefer something other than the treasures listed above? Let us know your favourite items from the Club Nintendo days — or even something you’ve gotten recently from the My Nintendo store — in the comments below.

Most Modern PCs Will Have No Issues Running Windows 11

With the announcement of Windows 11, Microsoft is making a big change to the requirements to evaluate the compatibility of PCs running AMD and Intel

Respawn Promises a Fix to FPS Stuttering Bug for PC